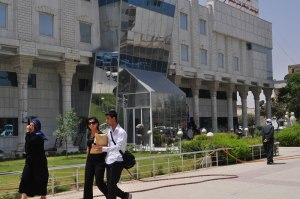 The first library in Sulaimany was opened on 13 of March 1944 and was situated in Sabunkaran Road. Peeramerd (old man) advised Life Magazine that Sulaimany Library was open. Peeramerd was a very famous writer of poetry in Kurdish history. In 1964, a new library was built which was based on the design of the old library building. This design was very good and functioned very well in its time but Sulaimany gradually became the top city for higher education and a university was opened and day after day, new schools were opening. Sulaimany became the capital of higher education and history and a new company was opened to print more newspapers and magazines. It therefore became necessary to build a new, more modern, library to house a wider range of literature. It was Dr Barham Salih , born in Sulaimany in 1960 and the current Prime Minister of the Kurdish Regional Government, who helped to arrange for the new library to be built in 2002-2004 and also made it possible to buy more books and magazines, making it a much richer place. Below is a list of people who worked in Sulaimany Library from 1944 until today.

One thought on “Sulaimani Library”

This site uses Akismet to reduce spam. Learn how your comment data is processed.